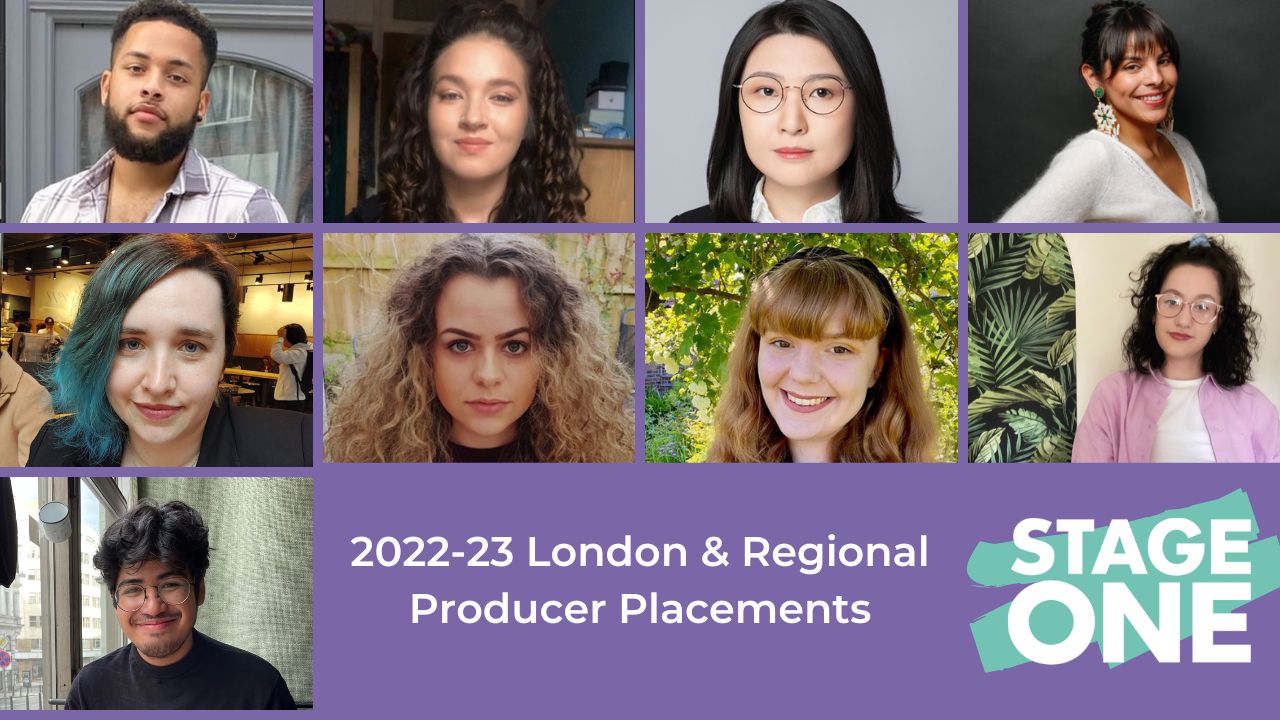 Our Stage One Producer Placement Scheme offers aspiring producers the opportunity to work in an established production company. They undertake the role of a production assistant/trainee producer for 6—12 months learning ‘hands-on’ how the role of a producer works. This is a paid role, which is funded by Stage One and the host producer. We'll soon be starting the search for next year's hosts in the Autumn, with applications for next year's scheme to open in early 2023.

Although they've already started, we wanted to give them a little shoutout; so without furtherado, we're pleased to introduce our Stage One Placement Producers for 2022-23!

You can read more below about each producer, where they are working and what exciting work they are producing at the moment.

I am a freelance creative based in London, with experience and training in a variety of fields. I am an experimental and enthusiastic theatre creator, always dedicated to creating spaces that are collaborative, inclusive and open. I am deeply passionate about this as I wish to diversify the industry. I aim to do this by continuously exploring how theatre can be used to reflect and question the culture around us. I am dedicated to maintaining an uplifting attitude, so that other creatives I collaborate with feel empowered to be the best version of themselves. I have experience in producing off-west end theatre and am excited to further develop my commercial producing skills.

My name is Magdalene and I have started the Stage One Trainee Producer placement at Seabright Productions. I have been interested in theatre production since university where I produced a number of shows, mostly new writing. My final production The Devil You Know won funding to go to the Edinburgh Fringe where it had a sold out run and transferred to Nottingham Lakeside. I then produced Spiral at the Park Theatre with Veritas Theatre Company. I also worked as production intern at Kenny Wax Ltd on shows such as Six, The Play that Goes Wrong, and Identical.

Jing Bi is an emerging producer based in London and originally from China. Jing comes from business background and experienced in financial aspects of producing. She has recently joined ATG as Stage One Trainee Producer. Past productions she produced includes Small Hours (Mountview Catalyst Festival), The Bandaged Woman (The Old Red Lion Theatre, Mountview Catalyst Festival).

María Inés is a Mexican London-based theatre and opera creative producer. María Inés has more than 10 years of experience working across theatre and opera in both Mexico and the UK. She has produced more than a dozen critically-acclaimed productions in Mexico's top theatres with her company MIO PROJECTS, working alongside internationally established Oscar-nominated and Grammy-awarded artists, as well as with emerging new talent. In London, previous to joining Playful, she produced A Fantastic Bohemian; A four star (Sunday Express) immersive opera at The Arcola Theatre, which was also her debut as a Director, and Invisibles at Vault Festival directed by Nastazja (Somers) Domaradzka. In 2019 she worked as Assistant Director at the English National Opera, the Birmingham Opera Company and the Royal Opera House, assisting Daniel Kramer and Graham Vick OBE, respectively. She has an MFA in Advanced Theatre Practice from the Royal Central School of Speech and Drama (2016-2018). She is currently working on Wicked with Playful Productions and is developing new work both for the UK and Mexico. Her next project in Mexico is Emilia by Morgan Lloyd Malcolm, which will be the first production of this Olivier- awarded play to be staged in North and Latin America (2023). In the UK, María Inés seeks to tell stories through cross disciplines - mainly but not only-  of Latin American artists, and promote perspectives and voices that are vibrant, bold and that have a strong universal resonance in today’s world.

Miranda is a mid-scale theatre producer based in Sheffield. She has been involved in arts production and administration for the last eight years, including as an independent producing for Tim Norwood, co-founding The Local Theatre, a small new writing venue in Sheffield, and as a Board member at Sheffield Creative Guild. Previously, she was part of Stage One's Bridge the Gap Producer's Programme and this year she is delighted to be a Stage One Regional Trainee at Sheffield Theatres.

Alexandra is at the beginning of her producing career, having recently graduated from The University of Kent with a distinction in Creative Producing (MA). She is Producer for Wildly Productions’ first short-film; ‘The Wild Flesh’ and is co-founder of GASP! Theatre Company, an all-women company that creates original shows set in stereotypically female-dominated work-places. GASP!, founded in 2015, creates productions which are daring, farcical and intelligently silly. Alexandra’s role within the company also includes writer, director and actor. Having toured England, Edinburgh and Europe with two original comedies ‘Not All Plane Sailing’ and ‘She Wears the Trousers’, Alexandra is looking to broaden her knowledge of small-scale theatre producing and begin developing her skills and practice within the West-End landscape.

Originally from Bulgaria, Maria-Magdalena is a Midlands-based Producer with several years’ experience in coordinating, producing, and delivering a range of multi-artform outdoor festivals and small-scale theatre performances and tours. She's currently working on the new concert musical To The Streets!, co-produced by Birmingham Hippodrome and China Plate.

Harris is a new producer and community-based theatre maker from Singapore, who has recently completed his undergrad at RCSSD. He is a co-founder and co-artistic director of Scratching Collective and is excited to use his practice to create environments of hope for audiences. Harris is this year's Bridge the Gap Trainee Producer.