Meet the Bridge the Gap 2022 Producers! 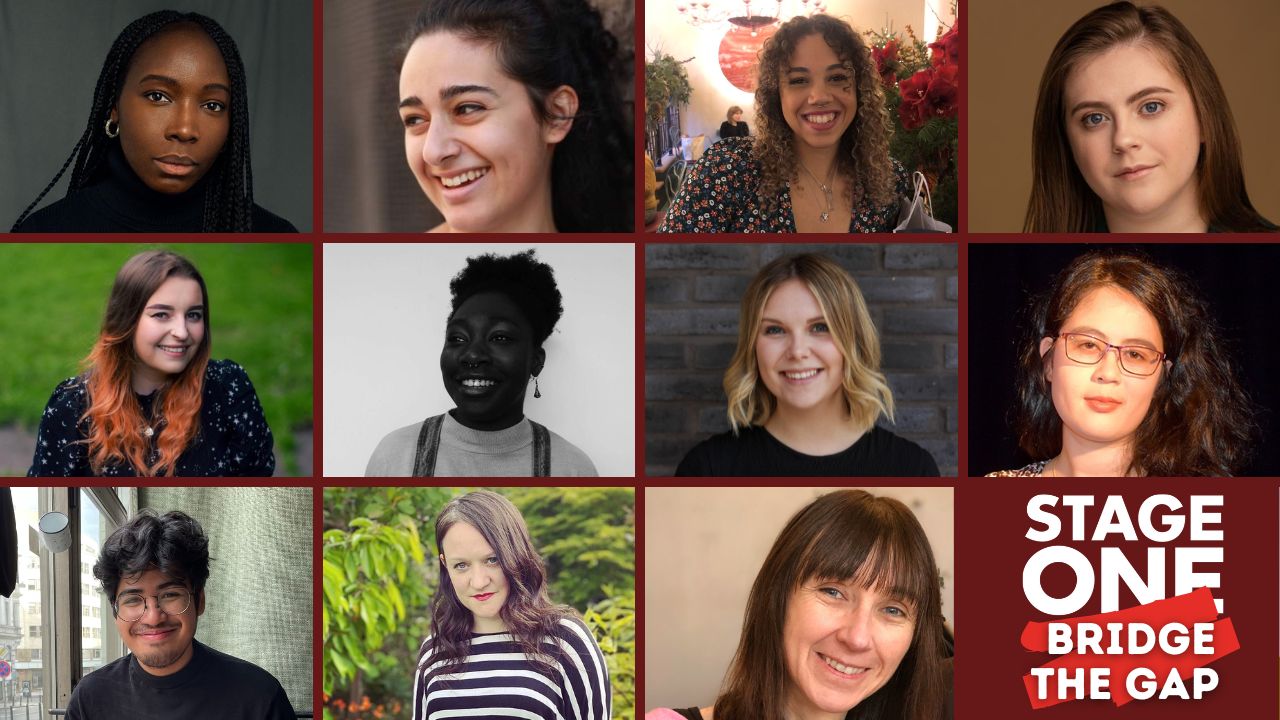 After receiving over 80 very competitive applications, it was even harder to make a decision this year. I'm thrilled to announce our 2022-23 Bridge the Gap Producers! Really excited to welcome them to Stage One & see how they will develop over the next year! JS

You may have spotted that there are 11 producers on the cohort this year! This is because Harris Albar will be participating in the programme alongside their Stage One Trainee Producer Placement with Gate Theatre which he will start later this summer.

Read more about each producer below:

Anya is a London based producer passionate about producing work that centres Womens perspectives. Alongside producing independently and for her company Out the Attic, Anya is also production assistant at The Bridge Theatre.

Beth is a producer and director based in the Midlands who specialises in developing new work. She has created several platforms for artists to share their work, including co-founding Plymouth Fringe Festival, to producing and curating the New Work Festivals for Curve and Amplify Festival for Nottingham Playhouse. She has produced various independent shows with a focus on new writing and regional voices.

Catherine is an Irish theatre and film creative. She is currently working as a producer with Liverpool-based theatre company ArtsGroupie, supporting the transfer of two of its productions to Shakespeare North later this summer and in its development of a new play to be staged early next year.

Originally from South London, Gift is a Nigerian-British producer/director whose work focuses on new writing and stories that represent the Global-Majority. She has experience in both theatre and film. Previous credits include BORN BAD (2020), A PORTRAIT OF A STRONG WOMAN (2022) and A NIGHT AND SOME CHANGE (2022). She was a producing intern at Park Theatre (2021) and the National Theatre’s Hamlet For Young Audiences tour (2022).

Harris is a new producer and community-based theatre maker from Singapore, who has recently completed his undergrad at RCSSD. He is a co-founder and co-artistic director of Scratching Collective and is excited to use his practice to create environments of hope for audiences.

Jennifer is a freelance theatre producer with multiple producing credits, spanning the North East, London and Scotland. She has worked with venues such as Gala Theatre, The Assembly Rooms Theatre and The Drayton Arms Theatre, as well as producing two original musicals for the upcoming Edinburgh Fringe Festival. She is the outgoing Treasurer of Durham Student Theatre, overseeing 30 theatre companies, and is a former President of Tone Deaf Theatre Company.

Layla is a freelance creative producer, artist and activist. She combines creative and socially engaged approaches to create live relationships between arts projects and social justice causes. She has worked in the UK with organisations such as the Rose Theatre, Theatre503, Shubbak Festival, and Theatre Deli, and across Europe with The Walk Productions.

Madison is a producer and creative from Essex who is now based in London. She works independently and with her theatre company The 5 O’Clock Club. She has produced shows which have gone to (The Chiswick Playhouse, The Hope theatre, The Brighton Fringe and The kingshead theatre). Madison’s passion is in storytelling and she hopes the work she creates and produces to reflect the stories of the masses.

Rach is a Liverpool based creative producer for theatre, film and events. After graduating from the Liverpool Everyman and Playhouse's Young Producers course in 2021 her and her cohort formed ‘Blabbermouth Collective’. Blabbermouth is a female led collective passionate about the arts and amplifying all voices within society. She is also passionate about making arts accessible for all.

Sophie started off producing within the dance sector with regional organisations Dance4 and DanceXchange and worked on the Birmingham International Dance Festival in 2018. After this Sophie was an Assistant Producer with In Good Company, the flagship, professional creative and business development programme for theatre makers in the Midlands. Sophie has supported a range of interdisciplinary artists and has a passion for artist development and embedding accessibility into processes and performances. Within a freelance capacity Sophie has produced with organisations such as Second Hand Dance and One Dance UK and independently produces a Birmingham based artist called Holly Clark. Sophie is due to finish an MA in Creative Producing very soon from Mountview Academy of Theatre Arts.